1-Wire to KNX Bridge with Arduino

Weirdly enough, there is no industrial solution to connect a OneWire Bus with a KNX Bus. So I made my own one. Thanks to the great work of the people in the KNX-Userforum and the authors of libraries like the KNX library, the OneWire library, the 2438 Library and tutorials like the ones from Hackatronics it was possible.

Basically to make a OneWire to KNX Bridge is not difficult, but it still took me a while to get the Arduino code right and to solve a couple of problems with providing power to 30 sensors and the pullup resistors. You don’t need to have to solve those problems, you can use this solution.

Disclaimer: If you use the links above, I get a very small percentage from Amazon. Thank you for your support of future tutorials.

A OneWire to KNX Bridge – But why?

As you can see above, 1-Wire temperature sensors are very cheap, in fact more than 50 times cheaper than a KNX temperature sensor. So it makes sense in a house to have a KNX Bus AND a OneWire Bus in parallel, and use the OneWire Bus for cost effective temperature sensing. Theoretically you could use the two “spare wires” of the KNX Bus to run the 1-Wire Bus in parasitic mode, but I have not tested this and do not recommend it. If you already have cabling in place you can try it, but the amount of sensors per branch will probably be limited. I don’t know exactly.

I have a separate cable for OneWire, same spec like the KNX cable, and I have a long and convoluted network of about 30 sensors running perfectly. However I use 1-Wire hubs for this. The 5V needed for normal OneWire operation are provided by those hubs, not through the Arduino, which has its power from the KNX bus. More on this bellow.

The Arduino draws its power from the KNX bus coupler. The 5WG1 117-2AB12 bus couplers data sheet says it can deliver a maximum of 10mA on the 5V output. The Arduino nano can draw up to 20mA on its own, but somehow it works well with this coupler and many others have reported it works. Some even tested it up to 20mA with success. However, I recommend to be cautious.

I assume that you already know what OneWire is and that it normally needs three wires: GND, DATA and 5V. It is however possible to use only GND and DATA and Connect 5V of the sensor to GND. It then draws its power from the DATA line. It’s called “parasitic mode”.

If you use a lot of sensors you will need more power. On temperature update (which happens simultaneously for all sensors, once the arduino asks for it) each DS18B20 uses 1.5mA of current. For a network of more than 10 sensors that is 15mA and that is certainly too much for the bus coupler.

I have about 30 sensors and because of this I have always been using two OneWire hubs. These hubs don’t do anything fancy to the data line, I believe they more or less connect those together, maybe have some circuit to lower reflection problems or so. What they do however is to deliver power to the 5V line. This could probably also be done by any power supply, but I don’t know for sure.

For OneWire to work with the arduino it needs a pull-up resistor from the DATA line to 5V. This is usually 4.7kOhm. In the case of a lot of sensors however, this is too high. It means, that once you connect the sensors the voltage of the DATA line falls. In my case with 30 sensors it fell to 4.3V. The Arduino could not read any data like this, and the bus coupler could certainly not provide enough power.

A 1k Ohm resistor would work, however it then would draw the power from the Arduinos 5V and therefore from the bus coupler making the problem even worse. So DON’T do this. In this case you need a separate power supply for the OneWire bus. In my case this is a hub. Maybe you could just use any power supply for the 5V Line of OneWire. I don’t know this, if you try and it works, let me know in the comments.

If you use a power supply for the OneWire bus you still need to have the normal 4.7kOhm resistor on the Arduino. But in addition to that you will need a PullUp resistor between DATA and 5V of the OneWire hub, respectively the OneWire 5V power supply and the DATA line.

The size of the resistor depends on the amount of sensors you have on the bus. It needs to be lower with more devices. In my case of 30 sensors and two hubs I have a 1kOhm resistor on one Output of each 1-Wire hub.

To find out the value you need, you simply measure the voltage of your DATA wire once you connected all your 1-Wire sensors. If it is 4.9 – 5V all is good. If it is lower than that use a smaller pull-up between the DATA line and the 1-Wire power supply 5V. Start with 4.7kOhm there too, and go lower until your DATA line reads 4.9V or more.

Connections for the OneWire to KNX Bridge

Thanks to this tutorial connecting is simple :

If you have a 5V arduino connect like this:

If you have a 3.3V arduino connect like bellow.
(This is for general KNX operation possible, but maybe problematic for this 1-Wire bridge)

I used an angled header to plug into the bus coupler. Its a bit of a hack, but it saves space and I later hot glued it in place. It doesn’t look pretty, but it works and is secure.

This is how to connect the Buscoupler to the Arduino

The pull-up (a very normal resistor, which is just called like this because of it’s function) goes between 5V and DATA. 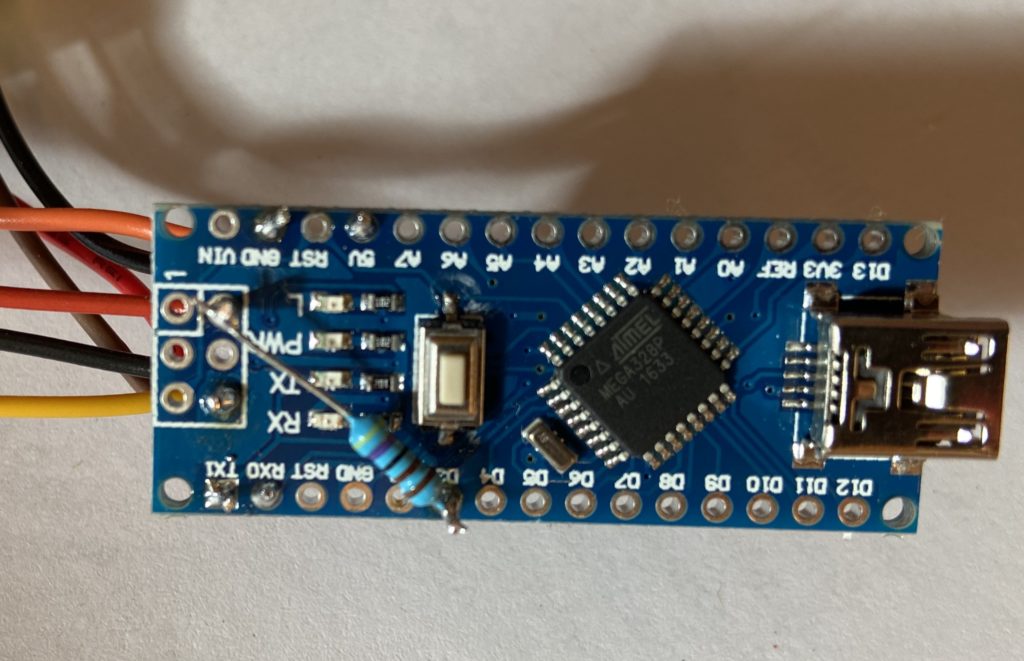 Arduino pull-up resistor between 5V and Pin 3 for 1-Wire operation.

Make sure it doesn’t touch anywhere it shouldn’t and also will not if a little pressure is applied by accident. 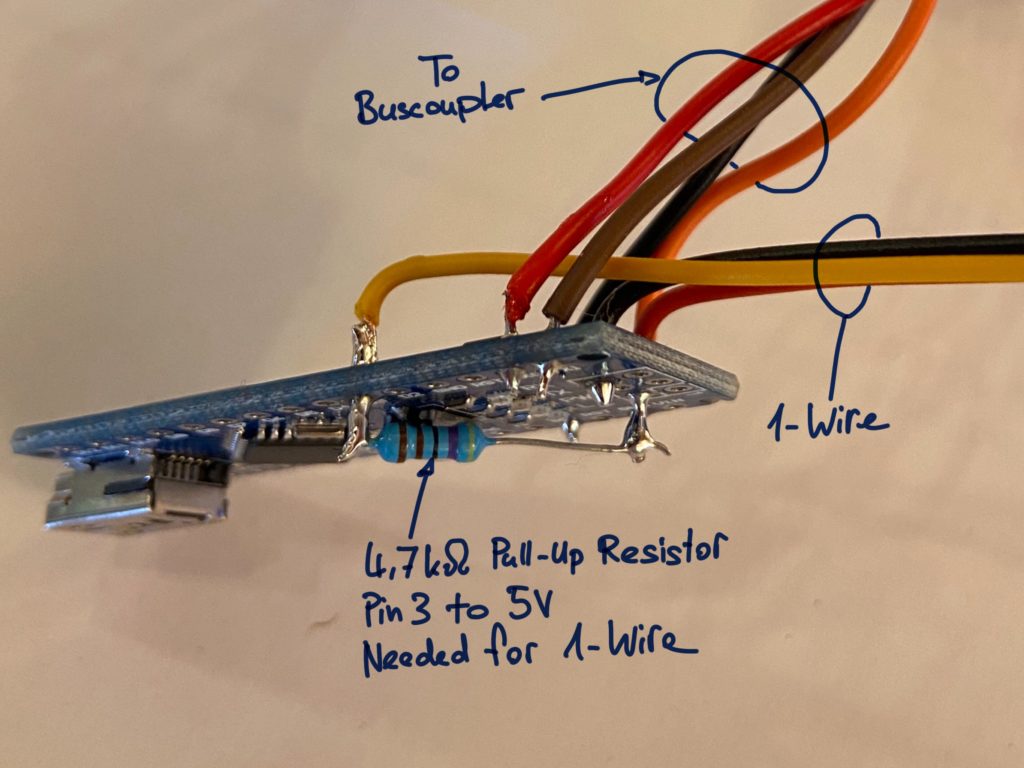 Everything that goes on with the Arduino in one picture. Wires to KNX bus coupler, to 1-Wire and the PullUp resistor.

After programming the Arduino you can fit it together with the bus coupler into the case. You only need the 5V line from the Arduino to OneWire, if you don’t have a separate power supply for it. So as you can see I removed this cable after testing.

Arduino and KNX bus coupler both fitted into a 2 unit din case. Separated with a bit of cardboard to avoid any shorts. 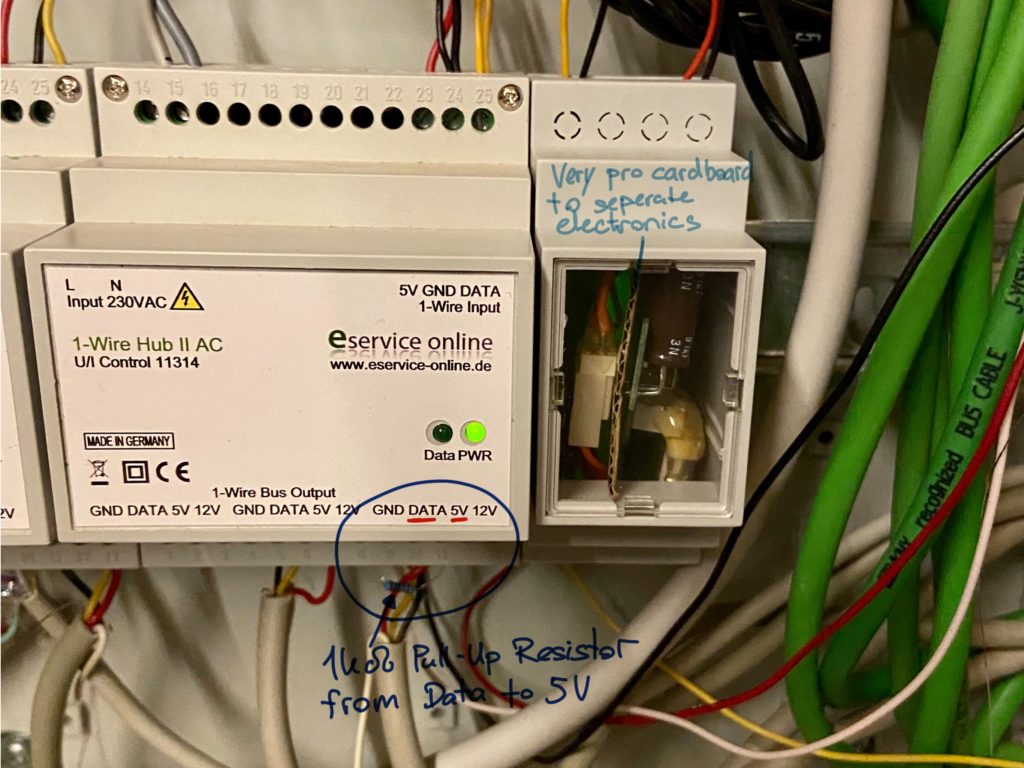 To be honest I can not recommend the hubs I have. I’m not sure how much they really do. Support of the company is rather slow and has not been very helpful to me in the past. Also their products seem overpriced to me.

Other people have done amazing work with the libraries and tutorials. This OneWire to KNX Bridge is only possible thanks to them and I am very grateful for that. In this case the people in the KNX-Userforum and the authors of libraries like the KNX library, the OneWire library and tutorials like the ones from Hackatronics.

Edit the software to your needs – these are the steps:

You will find, that within the software everything is commented and you really don’t need to change much, only whats described above. But one thing you need to change are the device addresses of the OneWire sensors. And for that you first need to know them and get them in the right format.

Use this tutorial and code to obtain the device addresses of your OneWire sensors.

These you can then insert into the code for the OneWire to KNX Bridge. 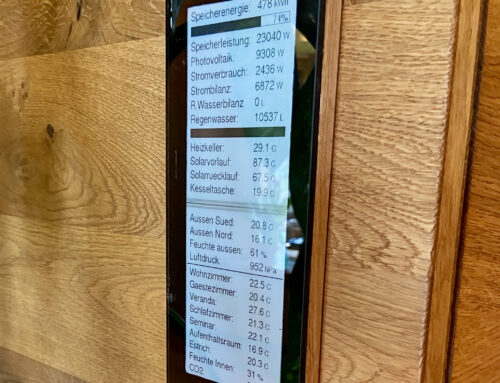