Electric Cars – It’s complicated, or is it?

The myths and facts about electric cars are jumbled into an incomprehensible mess when looking at the media. It seems that everything is highly oppinionated by either defenders or opponents of electric cars. Many true things are being said in favour and against electric cars, but very often neither side gets the main point. However, before we get into this, let me say one thing: The cleanest things are less cars or no cars. Bicycle and buses and trains are almost always cleaner than any other means of transport.

The arguments about electric cars boil down to two critical points:

Those points can in fact be true for some situations and make it look like an electric car is just green washing. But even for the situations where these two points apply, the electric car is still what every responsible vehicle owner of earth should drive because:

Electric vehicles have the potential to be clean. Fossil fuel cars have not.

A fossil fuel car can never have such a perfect case, it is a dead end, a road we don’t want to follow, it will always use a depletable energy source and the (poisonous) exhaust gases can never be recycled.

Putting the counter arguments into perspective 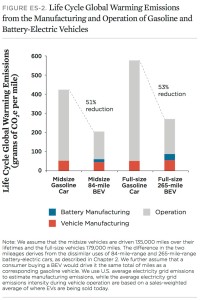 It depends very much where you live to know how much you harm the environment to charge your car. If you live in Switzerland where 50% of the grid electricity comes from water or simply in europe where we have very diverse grid-mix of solar, wind, water, nuklear, gehothermal and coal the electric car is always cleaner than a fossil fuel car. A study in Switzerland from 2013 has shown that only an electric car completely charged with electricity from fossil fueled power plants is indeed more harmful than a fossil fuel car. The study has looked very thouroughly at the whole cycle including the energy used to build roads and factoring in the almost double as energy intensive production of an electric car. Also a vey recent study done from Ucsusa comes to a very similar conclusion considering the typical US-grid mix of electricity and the whole cradle to grave life cycle. Please note, that CO2 emissions are an indicator for the energy used in the process of manufacturing.

The study from Switzerland shows additionally that if the EV is charged with electricity from renewable sources, it is especially green. I think many people are not aware of the fact, that even a small solar array on top of a garage of say 5×5 meters is already producing enough electricity to run a Tesla Model S for up to 20’000km. Such an array costs under 5000USD in 2016. The costs for driving the same distance with petrol and a similar sized car range from 1000-2000USD and this really posses the question why not everybody is doing that already.

There is lots of discussion on where this power should come from, since we would need more electricity. Sure we will and we will use a lot more solar power for example. Problems will have to be solved and they will be. Solutions are available, its the will that is lacking. For example if all cars in Switzerland would go electric, total electric power consumption would raise a mere 20%. That is totally doable. 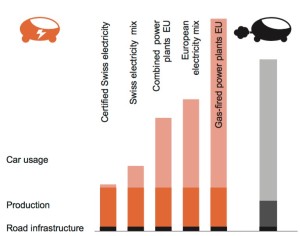 It highly depends who produced an electric car to know if its production is indeed an environmental disaster. Studies in that area always generalize and don’t look at individual manufacturers. Tesla for instance will use only renewable energy to produce its batteries and it will recycle dead batteries very thouroughly.

People who critizise the problem with batteries at the end of their live don’t seem to understand, that we are not talking about small batteries that a thoughtless consumer can throw into trash. Most manufacturers already pay good money to get used batteries back from the consumers and give them a second life as energy storage systems where specifications can be worse. Once really unusable the recycling of the batteries will be taken very serious from everybody because of the scarcity of the ressources involved. For instance cobalt.

The sourcing of some materials is indeed a problem as critics point out and work needs to be done there, a lot. But this is even more true for the sourcing of fossil fuels. Studies who pointed the environmental impact for producing the batteries and compared to combustion cars did not factor in the problems with mining of the oil. Think about fracking, oil spills, burning oil platforms and after all, wars. Considering this, it seems pretty silly when an advocate of fossil fuels critizizes the sourcing of lithium and cobalt for batteries. The argument is to be made, but it applies to both sides and it has a major difference: Oil has to be sourced again and again, it is destroyed, but lithium for instance, once we have it, we have it and we recycle it.

We have the power

We, the consumers, have the power to choose from whom we buy a car and how we charge it. Even if you can’t fit solar panels on your roof you can invest in solar power plants from others or buy certified electricity from you own grid. There is almost always a way.

Furthermore there is, especially in the US, a growing market of people who convert normal cars into electric cars. The prices are falling constantly since the major investment is the battery and battery prices are falling massively due to higher productions. You can convert pretty much every vehicle into an electric one if you want to or have somebody do it for you. Electric mobility is the future.

A normal combustion engine uses about 15-40% of the energy stored in diesel or petrol. The rest is lost in heat. An electric vehicle with a modern battery has an efficiency of about 80%. That means 80% of the electric energy that you take from the grid is actually used for driving, the rest is lost in inefficiencies, mostly of the battery and the motor. So EVs are far better in using the actual energy available. That means not only can an EV use cleaner energy, but also it uses the energy much more efficiently.
Also EVs need less maintenance, are therefore cheaper to keep alive and need less material and energy to do so.

By the way, why hydrogen cars suck

Hydrogen is mostly produced from fossil fuels, which is obviously stupid when it comes to environmental issues or by electrolysis from water. Electrolysis is an  inefficient process  at a maximum of 70%. So 30% of the electric energy used for the electrolysis is lost. There are ideas for producing hydrogen more or less directly from water with the help of sunlight which is interesting. With efficiencies of about 13% (from the sunlight) it is as efficient as a solar cell that produces electricity but no electrolysis is needed which amounts to a theoretical 100% efficiency compared to using solar electricity for electrolysis. It only in the labs yet though.

I’m not going into cars who burn hydrogene in combustion engines, since they are just as inefficient as the normal cars and it is futile to even consider it. The smarter hydrogen car uses a fuel cell which can convert hydrogen and oxygen into water and electricity directly. So hydrogen fuel cell cars are basically electric cars with a hydrogen battery. A wonderful idea with a problem.  The fuel cell is less efficient than a battery at a maximum of 60% (when only electricity and no heat is needed). Also so far they last only about 30’000km. Batteries already can do 10 times more.

So you use 100% electricity to produce hydrogen from water but you get only 70% of that energy back in the form of hydrogen. Then you use the hydrogen to run the car, but only get 60% of those 70% for driving. This is less than 45% efficiency at the very best that you get from a hydrogen fuel cell car. If you produced the hydrogen in one of those future solar cells mentioned it would be possible to get to 60%.

If you use the same amount of electric energy to charge the battery directly you get 80-90% of it into driving and there is a lot less infrastructure involved. Plus you are actually free to charge it yourself with your own electricity from a small wind turbine or solar panels, while you won’t produce hydrogen that easily yourself anytime soon.

Considering all facts the bottom line is clearly: battery powered electric vehicles are the future of responsible mobility. Only electric trains and muscles are better. 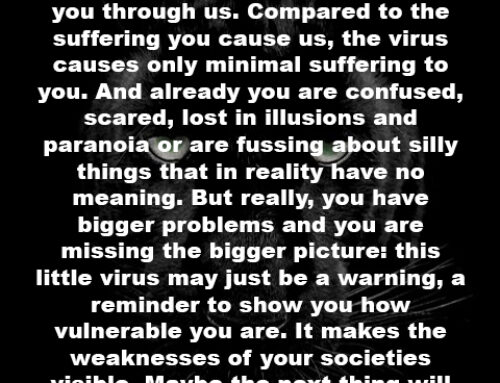